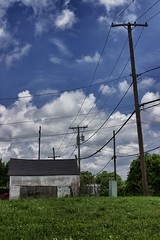 There’s an unassuming sign on Main Street at Fulton for Henry’s Restaurant, and if you happen to open the door you will find inside perhaps the best bar in America.

There’s a light that shines over the city at night from the gigantic manufacturing complex on Broadway, a kind of beacon of industry flexing its might, and if you don’t look too closely you won’t notice the building atop which it rests has sat more or less vacant since the early part of the last decade.

There’s an old fort worth checking out, the aptly-named and titular Old Fort Wayne, because once upon a time a place this big surrounding by so much else that is so small just had to have been front line of something, or perhaps an outpost of something else.

There’s an art museum downtown that stays open later than you would expect.

There’s a surprising abundance of beautiful old buildings downtown, so many left intact rather than so callously demolished the way they do in other places, as though enough people here recognized that there could be value to history or utility to preservation.

There’s a railroad platform along Superior Street, even though the trains don’t stop there anymore.

There’s a certain familiar rhythm to all these streets and landmarks, all having names like Main and Henry’s and Broadway and Fort and Fulton, and Superior because there are countless others just like them, and because there are countless other cities like this one, each using the same parts to tell their own version of the universal American story. To go to Fort Wayne is to go everywhere.