It’s a sports bar that just opened up six, maybe seven weeks ago. The manager’s a young guy, real sharp, says that I can order from him since he’s the only person in the place besides me who speaks English. Helpful, I think.

“I didn’t think you all came down here except to go to the beach.”

I shrug and order another.

It’s inside a makeshift tent city inside the zócalo, the old city center flanked by the annals of old local money and older local power. The protesting masses have taken it over, setting up camp and entrenching for a long, communal fight against the man in charge. Five tacos will set you back twenty pesos, which is a pretty good deal no matter where you are.

It’s the restaurant inside one of the nicer hotels in one of the nicer neighborhoods, everything much more modern and clean and upscale than one living up here generally hears about anything down there.

It’s a Chinese restaurant. Yeah, I know. Me either.

It’s a European-style cafe along one of the pedestrian malls, serving sandwiches and wine and coffee to anyone who wants to sit back or just wait out the rain. From inside, you can hear the rich baritone of a man outside, singing out loud as he accompanies himself on guitar, fingers finding the perfect countermelody to whatever beautiful song he is playing. Your Spanish isn’t bad, but you don’t understand exactly what he’s saying, so you sit back and just listen, really listen, until you recognize something in the way he walks the vocal melody into the chorus and it hits you: he’s singing Sinatra. Even Mexico does it his way.

It’s a fairly high-end bar in one of the more high-end districts. Everyone in and around it is educated, well-dressed, beautiful. Everyone. Meanwhile you, American, probably thought it was a good idea to dress down since you were headed to such a “rough” place and now, seeing you in your filthy jeans and faded t-shirt, the locals are all clutching their wallets and purses a little tighter, the way they did the last time they went to Rio or Caracas or Italy or Africa or all those other places you, Supposed Veteran Traveler, have not, and you find yourself reminded again that there is a huge difference between living in a world city and living in the world and perhaps you, American, have got a long way to go in that department. 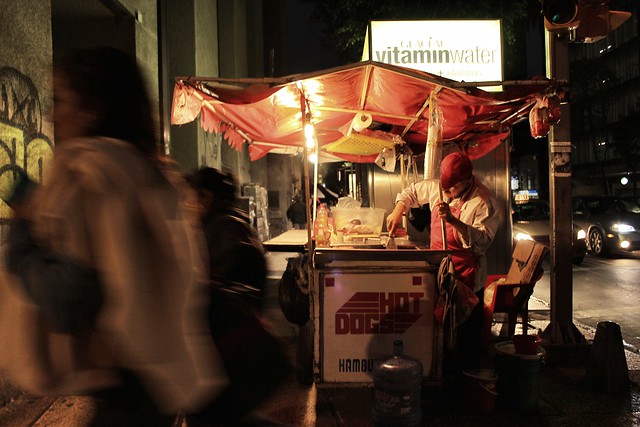